Man-Weave Technique Debuted on ‘The Real’

*For years, men have suffered with baldness, receding hairlines and alopecia. There have been many attempts at solutions but Erskine Reeves, Celebrity Barber has actually struck gold with his Man-weave technique. October 5th, Erskine debuted his technique nationally on FOX’s hit daytime talk show “The Real.” To the amazement of the hosts and viewing audience, Erskine transformed one gentleman’s entire outlook and boasted his confidence in less than a day.

Men have sought a combination of surgical and non-surgical methods to combat their issues of losing their hair. Some have altogether given up on ever finding an answer. In the process, their self-esteem has taken a plunge, their social lives almost gone and strained relationships because of the lack of confidence.

The non-surgical technique gives men their confidence back, according Reeves. Erskine demonstrated the technique on The Real with great success. No down time. No surgery. No needles. Best of all, men can treat the hair unit just as if it had grown from their scalps. 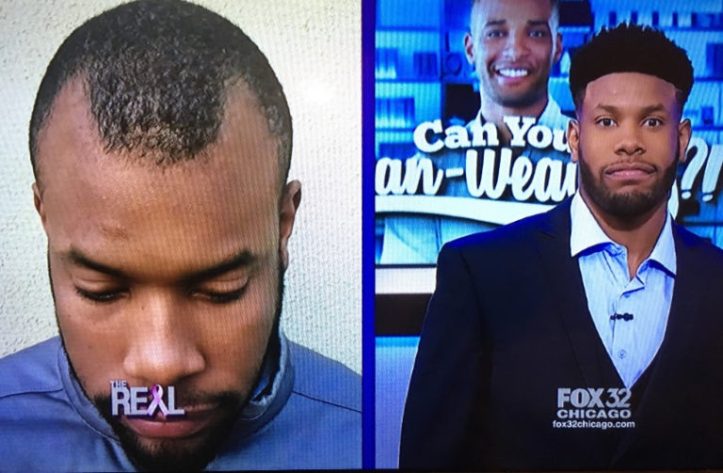 The Man-weave has revolutionized the Barber and Cosmetology world. Women have known about the life-giving technique of the instillation of hair units, however, because of Erskine’s customized technique, men are getting a new look and boost in confidence. As showcased on “The Real,” the male model’s video testified of the damaging effects of losing one’s hair and the opening up of possibilities to boosting self-confidence.

Erskine Reeves has a roster of high-profile clientele including celebrities, athletes, businessmen and community leaders. His approach to barbering and cosmetology has paved the way for many others to become entrepreneurs. Through his Barber Academy (Hillside, IL), Erskine educates a diverse student body to accommodate every ethnicity.