‘WHEN THE BOUGH BREAKS’ DEBUTS ON DIGITAL, BLU-RAY & DVD NEXT MONTH 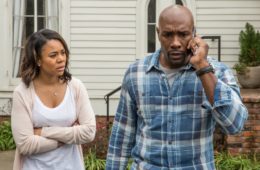 *Morris Chestnut (“The Perfect Guy”), Regina Hall (“Think Like a Man Too”), Romany Malco (“Weeds”) and Jaz Sinclair (“Paper Towns”) lead an all-star cast in the perfect date-night thriller “When the Bough Breaks,” debuting on digital December 13 and on Blu-ray and DVD December 27 from Sony Pictures Home Entertainment.

The story centers on John and Laura Taylor (Chestnut and Hall), a young, professional couple who desperately want a baby. After exhausting all other options, they finally hire Anna (Sinclair), the perfect woman to be their surrogate – but as her pregnancy progresses, so too does her psychotic and dangerous fixation on John. The couple becomes caught up in Anna’s deadly game and must fight to regain control of their future before it’s too late.

The “When the Bough Breaks” Blu-ray, DVD and digital releases come loaded with bonus content, including deleted and extended scenes and commentary with director Jon Cassar, writer Jack Olsen and Jaz Sinclair. The releases also include a behind-the-scenes featurette, “The Have’s and the Have Not’s,” where Cassar and costume designer Olivia Miles discuss the process of designing the characters and Chestnut, Hall, Sinclair and Theo Rossi reveal their approaches to bringing their characters to life.

“When the Bough Breaks” was produced by Bob Shay and Michael Lynne and executive produced by Morris Chestnut, Dylan Sellers and Glenn S. Gainor.